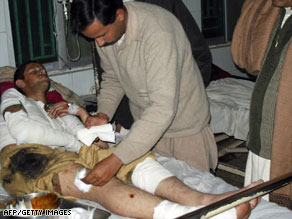 A paramedic treats a victim of a suicide blast at a hospital in Dera Ismail Khan on Sunday.

No one was killed in the first blast, which happened at a cafe near a local college, said Haji Abdul Rauf, the town's mayor.

Four residents and two police officers were killed and 20 others injured when a suicide bomber struck 10 minutes later, Rauf said.

The attackers were targeting police by attracting a crowd with the first blast, the mayor said.

A local journalist said two of the civilians killed were reporters who had arrived after the first explosion.

The resurgence of the Taliban has prompted U.S. commanders and the incoming Barack Obama administration to put more of a focus on confronting militants along the border.

The attack on Sunday came one week after a suicide car bomber -- apparently targeting people voting to fill a national assembly seat -- killed at least 37 people and wounded 16 others in the Bunair district of North West Frontier Province.

In November, a suicide bomber detonated his explosives in the midst of a funeral procession in Dera Ismail Khan, killing at least seven people and injuring 30 more, police said.

Journalist Janullah Hashimzada in Peshawar, Pakistan, contributed to this report.

All About North-West Frontier Province • Pakistan • The Taliban • Afghanistan