(CNN) -- A 19-year-old woman who handled ducks in northern China has died in Beijing from bird flu, the World Health Organization said Wednesday. 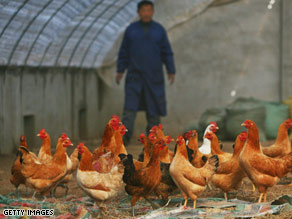 Nantong of Jiangsu province, China, last month, where the H5N1 virus was discovered.

The woman, Huang Yanqing, died Monday morning after she was admitted to hospital on December 27, according to state-run Xinhua news agency.

Huang had been in close contact with ducks at a market in Hebei Province, which neighbors Beijing, on December 19. She bought nine ducks from the market and cleaned the dead fowl before giving them to some relatives and friends, Xinhua reported.

Only Huang fell ill, though she had close contact with 116 people, according to the Beijing Municipal Health Bureau.

Zhao Qingchao, an official with the local government in Langfang City where the market is located, told Xinhua that they have taken steps to detect the source of the deadly virus.

No other cases of the H5N1 avian influenza have been reported from the same area, Xinhua reported.

Authorities have disinfected and isolated the woman's home, and officials met in Beijing on Monday about the case, but the market is still selling ducks, Xinhua reported.