LAHORE, Pakistan (CNN) -- Police have told CNN that there has been a fifth blast in Lahore after four earlier explosions rocked Pakistan's second biggest city. 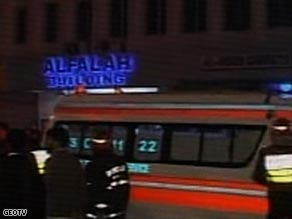 Emergency services at the scene of a series of explosions in Lahore.

Police and rescue workers rushed to the Tamaseel Theater on Ferozpur Road, where the latest explosion occurred. Police say the blast happened beneath a gas pipeline. No injuries have been reported.

The initial four explosions were triggered in rapid succession near Lahore's Al-Falah theater around 8:45 p.m. local time (10:45 a.m. ET) in the busy Mall Road district of the city, the officer said. Police said they injured six people but killed no one.

Investigators say they are trying to determine the type of the bombs used in the attack.

Earlier, police told a CNN stringer on the scene that the explosions were a result of grenades thrown by a suspected suicide-bomber who tossed them from an office building adjacent to the theater.

The suspected suicide bomber was arrested as he tried to blow himself up, the officer said.

Investigators now say two bombs were planted inside the theater and two near its main entrance. Security forces cordoned off the area and were checking for unexploded devices.

Local media broadcast images of Pakistani police and emergency personnel fanning out across city streets amid a panoply of red and blue lights.

Lahore has fallen victim to string of attacks in recent months.

Last month a woman was killed and four others injured by a car bomb in the provincial capital, according to police.

That explosion occurred in a residential area of the city near the Pakistani border with India, where border tensions reached heightened levels following November attacks in Mumbai, India's financial capital.