(CNN) -- A U.N. official said Monday that the global economic crisis is hurting efforts to clear land mines in Afghanistan, one of the world's most heavily mined countries. 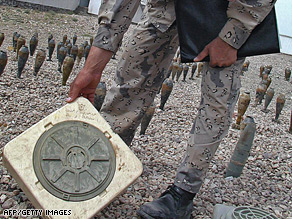 An Afghan soldier inspects a land mine in Herat, western Afghanistan.

Haider Reza, program director of the U.N. Mine Action Center for Afghanistan, said more than 82,000 anti-personnel mines were cleared in Afghanistan last year.

But he said the $500 million needed to meet the goal of clearing all mines by 2013 is under threat.

"We are at a very critical point, and this country and people cannot afford to see a devastating situation where not much money will come," Reza said, in remarks included in a U.N. news release.

More than 4 million people live in "mine-contaminated" areas in Afghanistan, the U.N. says.

The clearance of explosives is considered of key importance for the country's development.

The anti-personnel mines and 900 anti-tank mines cleared this past year constitute more than 20 percent of mines cleared from the country since 1989, the United Nations said.

The Ottawa Convention on land mines specifies that Afghanistan must be completely cleared of mines and unexploded ordnance by 2013.

The Afghanistan Compact, the partnership between the Afghan government and the international community, is calling for "70 percent of explosive-infested land to be cleared by 2011."

"If the resources flow into the program, we have the technical capacity and we can do the job," said Reza, who is reaching out to new donors, such as Persian Gulf nations.

"God forbid that the security situation throughout the country, especially in areas where we have to do the job, deteriorates to the extent that would not allow our de-miners to do their job. Otherwise, I am very confident we will make it," he said.