WASHINGTON (CNN) -- Sanctions will be placed on 13 people and three companies "for their involvement in the A.Q. Khan nuclear proliferation network," the U.S. State Department said Monday. 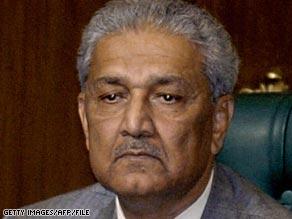 A.Q. Khan was the brains behind Pakistan's nuclear bomb.

Khan, a Pakistani scientist, operated an international black market in nuclear material to a number of states with a history of poor relations with the United States.

He was arrested in February 2004 and eventually pardoned by former Pakistani President Pervez Musharraf.

The department notes that Khan spearheaded an "extensive international network for the proliferation of nuclear equipment and know-how that provided one-stop shopping for countries seeking to develop nuclear weapons."

Iran and Libya received centrifuge components, centrifuges, and designs from Khan and his associates, and the United States believes the network "provided centrifuge designs, equipment, and technology to North Korea."

The department added that Pakistan, South Africa, Turkey, the United Kingdom, Germany, the United Arab Emirates, Switzerland and Malaysia are among the governments that have worked with the U.S. "to investigate and shut down the network."

"Many of Dr. Khan's associates are either in custody, being prosecuted, or have been convicted of crimes," it said.

"While we believe the A.Q. Khan network is no longer operating, countries should remain vigilant to ensure that Khan network associates, or others seeking to pursue similar proliferation activities, will not become a future source for sensitive nuclear information or equipment."