NEW DELHI, India (CNN) -- Hanso Devi moved to New Delhi from Rajasthan with just one hope -- to make a better life for herself and her family. 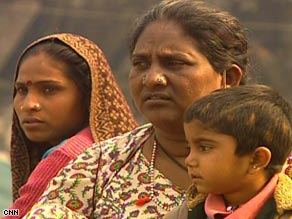 Hanso Devi says she and her family have nowhere else to go.

She, her husband, five children and other relatives erected a hut to live in --- a home that provided shelter and a base for her husband's streetside blacksmith business.

In a matter of minutes bulldozers level the place, leaving Devi and her family perched on a bed atop a sea of rubble. They have nowhere to go.

"They did it so fast that there was no time to take out anything. And the bulldozer broke everything on the way," Devi said.

"It's like we were picked up and thrown away," she said.

Watch how people are living in a wasteland »

Bulldozers razed the makeshift home and hundreds of others earlier this month as the Indian government moves to improve New Delhi for the 2010 Commonwealth Games.

Officials say the land is for a road and the demolitions are simply part of a master plan to clean up the city and move slum-dwellers to proper housing.

But, the government says, there will be no relocation for families like Hanso Devi's because they do not meet relocation requirements.

The government says they are squatting too close to the road, and are located in a major development zone.

"You see they have encroached on the specific project lengths -- there will be no notice, no relocation projects for them," said New Delhi Mayor Arti Mehra, who says she and the city are worried about those who have been left homeless.

About 3 million people live in New Delhi's slums, the government estimates. Mehra says New Delhi is slated to build 100,000 new apartments, though only 6,800 are under construction.

Critics say demolishing housing that has been here for years and relocating some residents but not others will hurt many who live on the margins of society.

"They'll be pushed to the brink," said A.K. Roy of the Hazards Centre Sanchal Foundation, a non-governmental organization.

"Eventually I think what the planners are doing, they are not realizing they'll be building up a pool of violence."

The people who live in New Delhi's slums are some of the city's maids, drivers, street vendors and day laborers. Roy argues the city could not survive without the services that the slum dwellers provide.

The slums may not have looked like much to outsiders, but to families who had lived there for years, they were everything. Their businesses, homes and temples were there. Now they are lost.

Some huts are still standing, for now. Among them is the home of Sheila Naurang Lal, built more than 20 years ago by the family who still lives there.

But that is little comfort for Lal as she sees what has happened to the homes a few yards from her house.

"I came to the road yesterday after being scared seeing the bulldozer," Lal says. "You must have seen the front part has been broken."

It has been two days since the latest slum eradication, but families are still eking out a living amid the ruins. A mother cooks for her children, a 90-year-old woman with a walker sits on her bed and someone's pet goat is tied up at a shrine, waiting for its owner.

Hanso Devi looks around as night falls. She will spend another night in the open with nothing to keep her warm but a small fire.

"We are going to sleep right here. There is no place other than this."

All About India • Delhi • Poverty