BEIJING, China (CNN) -- Senior North Korean officials say the communist regime has "weaponized" its stockpile of plutonium, according to a U.S. scholar, in a move suggesting that North Korea may have significantly hardened its stance on nuclear negotiations. 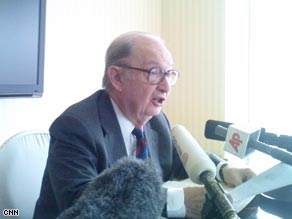 Selig Harrison, one of the few U.S. scholars granted access to senior North Korean officials, said at a news conference in Beijing that the officials told him they had weaponized 30.8 kilograms of plutonium, enough for four or five warheads.

The director of the Asia Program at the Center for International Policy, who just returned from a five-day visit to Pyongyang, said senior North Korean officials told him the warheads will not be open for inspection.

If it is true, the news portends a gloomy outlook for the future of the six-party talks that began in 2003 with the goal of getting North Korea to end its nuclear program.

"It does change the game," Harrison said.

South Korea, the United States, Japan, China and Russia are participating in the talks.

A 2007 agreement calls for scrapping nuclear weapons on the Korean peninsula in return for energy aid to the North, normalized relations between the North and the United States and Japan, and a formal peace pact.

The North Koreans told Harrison they want the rest of the fuel aid that Japan has promised them.

North Korea had agreed to disable the reactor that had produced plutonium for nuclear weapons. But the United States and its allies have asked it to give up the plutonium it already has, an estimated 30 kilograms, as well as details of any other bomb-producing programs.

Harrison said one possible reason for Pyongyang's tough new stance could be the declining health of leader Kim Jong Il, who reportedly suffered a stroke last year and may no longer be involved in day-to-day decisions.

"People I talked to have many indications that some important things are submitted to him, but he is not working in the way he used to," Harrison said.

He said military hard-liners have taken the lead in demanding from the United States a full declaration and verification of all nuclear weapons sent to South Korea between 1957 and 1991. The hard-liners also seek full normalization of relations with Washington before more talks about scrapping their nuclear arsenal.

On Tuesday, during her Senate confirmation hearing for the secretary of state position, Sen. Hillary Clinton made it clear: de-nuclearization first, then diplomatic normalization.

President-elect Barack Obama has stated his willingness to talk to the North Korean leader.

Harrison also said the North demanded the completion of the light-water reactors as compensation for the dismantling of the Yongbyon nuclear reactor.

The light-water reactor, which is not capable of producing weapons-grade plutonium, was promised to North Korea in the early 1990s for the North giving up its nuclear weapons. Its construction has been suspended.

North Korea has long considered its nuclear program integral to its national security.

North Korea tested a nuclear weapon in 2006. In June, it acknowledged producing about 40 kilograms of enriched plutonium.