BEIJING, China (CNN) -- At Beijing's East Train Station, some travelers are literally carrying their lives on their back. 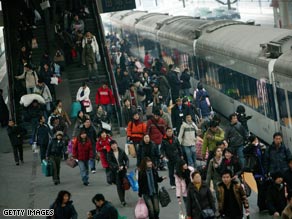 "I don't know if I'm going to come back," said one migrant worker on his way to his home province. "I might just end up working on the farm." He was weighed down by a giant pack filled with everything he could call his own.

Millions of migrant workers are leaving the cities, returning to their homes in the vast Chinese countryside, for the Chinese New Year holidays. But not all will be celebrating.

Many do not have jobs to come back to. They flocked to the urban areas during boom times to earn a better living. Some have not seen their families for years -- the trip home is too expensive. But they have sent money home faithfully every month.

When they finally can go home, the journey is long.

"I will be standing on the train for 24 hours," said one man on his way to Zhejiang province on the country's eastern seaboard. Some will travel much farther.

The migrant workers are among 188 million people heading home for the holidays, also known in China as Spring Festival. But the actual numbers might be much higher. Travel is already up significantly compared to last year, when brutal snowstorms stranded passengers for days.

This year, more people seem to be going home than usual because of the global economic crisis. There are so many passengers trying to get from one place to another that tickets are hard to come by. Planes, trains and buses are fully loaded to destinations across the country.

The train is the most popular option, cheaper than a plane and faster than a bus. But tickets are selling out fast. Some people have waited in line for hours, even days to get a ticket.

"I started standing in line three days ago," said one man. "There's no way to buy the ticket."

Others stood at the entrance to Beijing's East Station with signs. "Need two tickets to Weihan" or "Want to go to Inner Mongolia."

Some blame the ticket shortage on scalpers who are hoarding tickets, then re-selling them for a profit. One man said he wanted 100 yuan or $15 more per fare and indicated he had tickets to multiple destinations.

The Chinese government has cracked down on scalpers, arresting more than 4,000. But many Chinese think scalpers are more of a solution, than a problem. One woman told us she bought a ticket from a scalper because there was no other way. All the tickets to her hometown were sold out days in advance.

The desperate hunt for tickets is a sign this could be China's most massive mass migration ever. And with the Chinese economy slowing down so much, so fast, this may be the last time some people are making the trip.