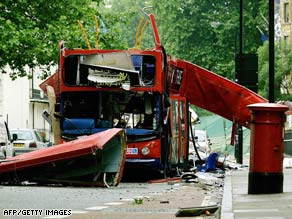 The double-decker bus damaged by a bomb in central London on July 7, 2005.

Zabih al-Taifi was arrested in a village near Peshawar on Wednesday as part of ongoing security operations in the area, police and intelligence officials told CNN. Six others, both Afghans and Pakistanis, were also arrested.

The Metropolitan Police Service in London, also known as Scotland Yard, issued a statement refusing to comment on the arrest.

"Speculation around this reported arrest with alleged links to an ongoing terrorist trial is unhelpful and may be prejudicial to current criminal proceedings," it said.

The London blasts killed 52 people and wounded at least 900 others when bombs went off on three subway trains and a bus on July 7, 2005.

Security analysts say the village where al-Taifi was arrested in the North West Frontier Province has been the site of recent clashes between Pakistani security forces and militants.

All About Pakistan • Al Qaeda • Terrorism