Jelena Jankovic: On top of the tennis world

Jelena Jankovic is making a reputation for herself as one of the hardest working women in tennis. 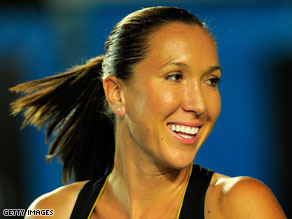 Grin and bear it: Jelena Jankovic hopes 2009 will be the year she wins a Grand Slam tournament.

Only a few others on the women's tour competed in as many matches as her last year, and her consistency, blistering forehand and an improved all-round game saw her end 2008 as the world No. 1.

She prepared for the Australian Open -- under way in Melbourne -- in the punishing heat of Mexico and hopes that winning her first Grand Slam tournament under the harsh Melbourne sun will silence the critics who have questioned her right to the No. 1 spot without having won a Grand Slam title.

"I don't understand why so many questions are being asked about that. I mean it's not the end of the world. I just play my tennis and I enjoy every match. I go on the court with a smile and that's all that matters to me. And if it will happen it will happen," she told CNN before the Australian Open.

While sounding somewhat fatalistic about her chances at the first Grand Slam of 2009, it belies a determination that has propelled the upbeat 23-year-old Serbian from an early childhood in Belgrade to the top of women's tennis and a jet-setting lifestyle.

She moved from her native Serbia to Florida when she was just 12 years-old, training at the Nick Bollettieri Tennis Academy -- the same tennis camp that honed the skills of Maria Sharapova and the Williams sisters.

Being away from her family from such a young age made her grow up quickly, she says: "I think I matured much faster than some of the girls my age and made me much stronger as well."

Life as an international tennis professional also means life on the road, and Jankovic admits that sometimes it can be tough.

"For me the most difficult thing is being away from my family and friends, away from my country. Sometimes I just wish I was a normal girl, just staying at home and living a normal life," she told CNN.

But her desire to be the best in the world and determination to succeed is galvanized by the achievements of her fellow Serbian tennis stars on the tour, Novak Djokovic and Ana Ivanovic.

"We are strong individuals and we come from a background where we didn't really have facilities to train, or the best financial status. We made it with our will and with our determination," she said.

"I'm proud that we have gone a long way and we have achieved huge things coming out of a small country. And I hope that will inspire and motivate the younger generation and help them by building a tennis center so that they can train in Serbia, develop their games and not have to go abroad like we had to do in order to become champions.

"It's amazing. In Serbia people are following that sport and waking up at three in the morning to watch us play," she said.

If she can dispatch the opposition in Melbourne with the same composure and determination she's shown in other tournaments she could finally have a title to match her ambition and give her compatriots something to really celebrate in the wee hours of the morning.