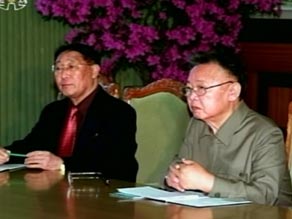 Kim, 66, has rarely been seen since a reported stroke in August, but he did appear with Wang Jiarui, leader of the International Department of the Communist Party of China, in a series of photographs shown on North Korean television. Kim was noticeably thinner in the photos.

Wang is leading a six-member delegation from China that earlier met with North Korean Prime Minister Kim Yong II and other top officials on strengthening economic ties between the the secretive state and its closest ideological ally.