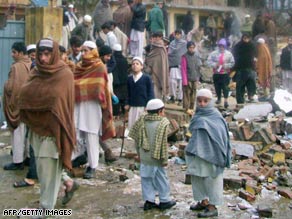 Students gather outside a destroyed school on January 17 in Kundar in Pakistan's Swat Valley.

A day earlier, radical cleric Maulana Fazlullah threatened to kill more than four dozen government officials if they did not appear before him for opposing the Taliban.

Local newspapers on Monday printed the list of 50 government officials and tribal elders whom Fazlullah has threatened with death.

The boy's high school that was destroyed was located in Mingora, the valley's main city, said Sher Afzal Khan, an education officer for Swat. The attack occurred early Monday and no one was wounded.

Swat Valley, located in North West Frontier Province, was once Pakistan's biggest tourist destination. It is situated near the Afghanistan border and about 186 miles (300 km) from the capital city of Islamabad.

The valley boasted the country's only ski resort and was a draw for trout-fishing enthusiasts until it was overrun by militants, led by Fazlullah. He has launched a violent and deadly campaign to enforce Taliban-style fundamentalist Islamic laws throughout the province.

The militants want to require veils for women and beards for men, and to ban music and television.

The central government has long exerted little control in the area, but it launched an intense military offensive in late July to flush out militants.

As retaliation for the military presence, the Taliban has carried out a series of deadly bombings, and has said the attacks will continue until the troops pull out.

The bomb, planted on a bicycle, went off in the town of Dera Ismail Khan, said Mohammad Riaz of the province's police force. It killed shopkeepers and pedestrians, added the town's police chief, Abdul Rashid.

All About Pakistan • Terrorism