BANGKOK, Thailand (CNN) -- A new boatload of Rohingya refugees washed up on the shores of Thailand early Tuesday, raising questions about the type of treatment they would receive. 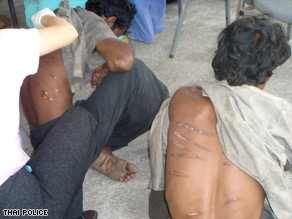 Male refugees show scars they say were caused by beatings at the hands of the Myanmar navy.

The boat was carrying about 78 people, Thai police said, and many had severe burns from a fire that broke out on board.

Most were members of neighboring Myanmar's Rohingya minority, which has been fleeing persecution by the country's hard-line government for years.

Other members of the Rohingya have allegedly been abandoned at sea after being rounded up by Thai authorities.

A recent CNN investigation found evidence that the Thai military towed hundreds of refugees into open waters only to abandon them.

CNN obtained several photos of this activity including one photo that shows the Thai army towing a boatload of some 190 refugees far out to sea. CNN also interviewed a refugee who said he was one of the few that survived after his group of six rickety boats were towed back to sea and abandoned by Thai authorities in January.

The Thai army has denied this allegation, while the Thai government has launched an inquiry.

But one source in the Thai military, after extensive questioning, did confirm to CNN that the Thai army was operating a dump-at-sea policy. The source defended it, insisting that each boatload of refugees was given sufficient supplies of food and water.

That source claimed local villagers had become afraid of the hundreds of Rohingya arriving each month, accusing the refugees of stealing their property and threatening them.

That source claimed local villagers had become afraid of the hundreds of Rohingya arriving each month, and that they were accusing the refugees of stealing their property and threatening them.

The Rohingya, a minority in Myanmar, have been fleeing their country in make-shift boats for years in search of a better life, and maintain that they are fleeing persecution by the regime in Myanmar, formerly Burma.

The Thai government maintains that "there are no reasonable grounds to believe" that the Rohingya are fleeing Myanmar out of fear of persecution.

"Their profile and their seasonal travel further support the picture that they are illegal migrants, and not those requiring international protection," it said in a statement released Tuesday by the foreign ministry.

In that statement, the Thai government maintained that its policies in dealing with all illegal migrants are in accordance with its laws and international guidelines. It said "basic humanitarian needs" are given to the migrants before they are returned home.

"We have upheld our humanitarian tradition and ensured that new arrivals are adequately provided with food, water and medicines, with necessary repairs to their boats," the ministry's statement said.

The government noted that Thailand has already been inundated with as many as 20,000 illegal migrants -- most of them Rohingyas -- and "accepting those arriving in an irregular manner would simply encourage new arrivals."

The government "categorically denied" media reports blaming Thai authorities for mistreating the illegal migrants, and intentionally damaging their boats. It said it would seriously investigate such cases if any "concrete evidence" is presented.

-- CNN's Dan Rivers and Kocha Olarn contributed to this report.