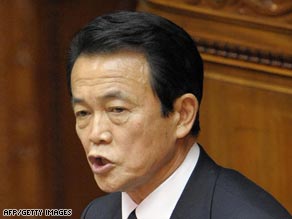 Japanese Prime Minister Taro Aso has to sign execution certificates before the death penalty can be carried out.

"Japan is going against the rest of the world by increasing the pace of executions, at a time when other countries are slowing their pace."

Japan executed 15 inmates in 2008 and 95 more currently sit on death row. Japan's rate of executions since August 2007 has been approximately one execution every two to three months.

The nation experienced an informal moratorium on capital punishment when Seiken Sugiura, Justice Minister from 2005 - 06 under Prime Minister Junichiro Koizumi, publicly stated he would not sign the execution orders, based on his Buddhist beliefs. Japan's justice minister needs to sign off on the execution certificates for the death penalty to be carried out.

According to Amnesty International, 59 nations still allow the death penalty for what the organization calls "ordinary crimes." The group describes "exceptional crimes" as those committed in circumstances such as war.

The vast majority of executions occur in a handful of nations: the United States, China, Iran, Pakistan and Saudi Arabia, Amnesty International said.