By German Priks for CNN

(CNN) -- The Kyrgyz government is planning to close a strategically important U.S. military base that Washington uses as a route for troops and supplies heading into Afghanistan, Russian media reported Tuesday. 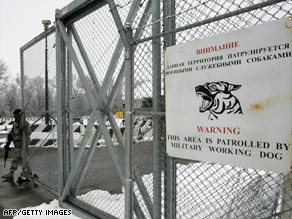 A U.S. troop guards the main access checkpoint to the Manas Air Base on December 18, 2008.

Kyrgyz President Kurmanbek Bakiyev said Tuesday at a news conference in Moscow that "all due procedures" were being initiated to close Manas Air Base, the Russian news agency RIA-Novosti reported.

The announcement was made after news reports of a multimillion-dollar aid package from Russia to Kyrgyzstan.

"It provides us with launching point to provide supplies in Afghanistan. We very much appreciate [Kyrgyz] support in using that base and we hope to continue," he said at his daily news briefing.

Gen. David Petraeus, who oversees U.S. operations in the Middle East and Central Asia, including Afghanistan, was in Kyrgyzstan last month, partly to lobby the government to allow the United States to keep using the base.

He said he and Kyrgyz leaders did not discuss "at all" the possible closure of the base and said local officials told him there was "no foundation" for news reports about the issue.

The United States pays about $63 million a year for use of the base and employs more than 320 Kyrgyz citizens there, Petraeus said. The base has been in operation since December 2001 under U.N. mandate

The Russian newspaper Kommersant reported January 30 that Russia would offer Kyrgyzstan a $300 million, 40-year loan at an annual interest rate of 0.75 percent, and write off $180 million of Kyrgyz debt.

Kyrgystan is also home to a Russian military base, at Kant, that officially opened in 2003.

The United States is planning to send an additional 30,000 troops to Afghanistan to halt a resurgence of the Taliban. Petraeus described Manas as having "an important role in the deployment of these forces" and in refueling aircraft.

The relationship between the United States and Kyrgyzstan was damaged when a Kyrgyz citizen was killed by a U.S. airman in December 2006. The airman was transferred out of Kyrgyzstan and the dead man's family was offered compensation. Petraeus said in January the investigation was being reopened.

Bakiyev said in announcing the base closure Tuesday he was not satisfied with the inquiry into the accident and that his government's "inability to provide security to its citizens" was proving a serious concern.