BEIJING, China (CNN) -- China is suffering another natural disaster -- this time, the worst drought in half a century. The land is parched and the irrigation dams have dried up. Crops and livestock are dying. 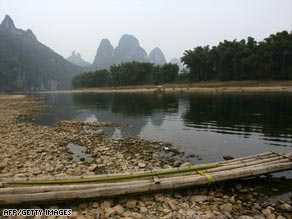 Water levels in some Chinese rivers are well below their average with 50 to 80 percent less rain than last year.

China on Thursday raised the drought-emergency-alert level from orange to red and allocated an additional $44 million dollars on top of the $13 million in emergency aid already released.

Since November northern and central China has had little rain. Many places have not had rainfall for more than 100 days.

"The extent of drought is quite extensive, the impact is quite great," forecaster Zhang Peiqun said in an interview with state television CCTV. "Rainfall on average has been 50 to 80 percent less than that of last year."

China has been hit by a string of natural disasters in the last year. In addition to the drought, Chinese officials have had to battle back against a brutal winter that stranded millions and a deadly earthquake that killed tens of thousands.

In the drought, more than 4.3 million residents face a shortage of drinking water, as do 2 million livestock.

Reached by telephone, a spokesman of the Henan Drought Relief Headquarters told CNN that the worst affected areas were north of the Yellow River, including the cities of Zhengzhou, Kaifeng, Jiaozuo and Luoyang.

"The water level of the Yellow River is very low at this moment and the government is doing relief operations," he said. The water level at the Xiao Langdi reservoir is only half of last year's.

Watch more on the drought »

With the emergency funding, teams of specialists have been dispatched to deliver technical expertise and relief supplies. The Anhui Agriculture Department is telling farmers in drought-hit villages to irrigate more efficiently, while other provinces have resorted to cloud seeding to induce rainfall.

Some relief may be on the way. Xinhua reported Thursday that meteorologists expect light to moderate rainfall or snow in some drought-hit areas over the next couple of days.