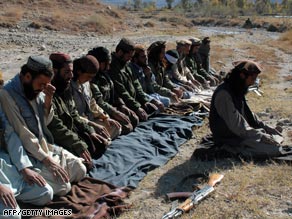 Piotr Stancza was kidnapped September 28 from the city of Attock in Punjab province. Stancza had been based there for a Polish survey company searching for natural gas.

Polish Embassy spokesman Peter Adams said his offices were aware of local media reports but were waiting to hear officially from Pakistani authorities. He said all efforts had been made by Polish authorities to pressure the Pakistani government to do whatever it could to secure Stancza's release.

"From the Polish side, we did whatever we could, pressuring the Pakistani government on the presidential and prime minister level," Adams said. "Problem was, this was solely Pakistan's responsibility. Demands were only towards [the] Pakistan government."

Adams said there had been no demands for ransom. The Taliban had demanded the release of Taliban prisoners being held by the government and a pullout of government security forces from the tribal areas.

Although there were assurances that the Pakistani government was doing everything it could and that Stancza would be freed soon, Adams said it was never clear what the government was actually doing to secure his release.

A spokesman for Pakistan's interior ministry said that the reports of Stancza's death have yet to be confirmed and that the case of his kidnapping was a high priority for the government. Shahid Ullah Baig said the government had been working hard to retrieve Stancza unharmed but did not give details.

"The Pakistan government is doing its level best to secure his release," he said, adding, "Human life is more important to us than anything else."