TOKYO, Japan (CNN) -- Nissan, Japan's third-largest automaker, announced a series of steps Monday to deal with the economic downturn, including slashing its workforce by 20,000. 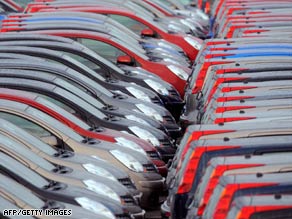 Nissan is planning to slash its global production by 20 percent.

The cost-cutting measures makes Nissan the latest among the country's carmakers to take drastic action in the face of a worsening financial outlook.

The company also said it is eliminating bonuses for its board of directors. And until its financial situation improves, it is reducing board members' salaries by 10 percent.

The company took the steps after reporting a $860 million third-quarter consolidated net loss after tax. For the same period a year ago, it had a net income of $1.5 billion.

Nissan's net revenue is down 34.4 percent. It has revised its forecast for the fiscal 2008, saying it will post a net loss of $2.9 billion.

"In every planning scenario we built, our worst assumptions on the state of the global economy have been met or exceeded, with the continuing grip on credit and declining consumer confidence being the most damaging factors," said Nissan President and CEO Carlos Ghosn. "Looking forward, our priority remains on protecting our free cash flow and taking swift, adequate and impactful actions to improve our business performance."

Among other steps the company said it will take are:

• Suspending part of the five-year strategy plan it unveiled last year, dubbed Nissan GT 2012. The 'G' stood for growth; the 'T' for trust. As part of the plan, the carmaker had hoped for 5 percent revenue growth on average over five years;

All About Nissan Motor Co. Ltd.