(CNN) -- A court has lifted a ban on identifying a man charged with one of a number of deadly wildfires that scorched southeastern Australia this month. 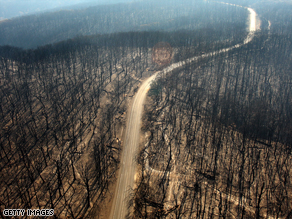 A dirt track runs through the burnt out forest in the Kinglake region of Victoria state.

The man, 39-year-old Brendan Sokaluk, did not appear in Monday's hearing in Melbourne Magistrates' Court, the Australian Associated Press reported. An order banning the publishing of Sokaluk's street address or his image remains in place.

Public passions are running high in the aftermath of the fires that have killed scores of people. One T-shirt says, "The bastards who lit Victoria's fires should: Burn in hell."

Sokaluk is suspected of lighting a fire on February 7. He was charged with arson causing death, intentionally or recklessly lighting a bush fire, and possessing child pornography, Victoria state police said last week. The fire Sokaluk is accused of setting killed at least 21 people in Gippsland.

Sokaluk's identity had already been revealed on social networking sites before the court lifted the suppression order on his name.

There were 12 Facebook groups carrying details about Sokaluk, with one attracting more than 3,600 members.

Robbie Shenton, who has joined one such group, told CNN: "The judicial system had no right to suppress his name or photograph."

The death toll in a string of fires across Victoria climbed to 189 on Monday, police reported. The number of fires burning had dropped to six, from about a peak of about three dozen, the Country Fire Authority said.

Watch a survivor tell his story »

Meanwhile, more than 150 detectives were working on the arson investigation, authorities said. The fires have destroyed more than 1,800 homes and displaced about 7,000 people.

Priyanka Deladia contributed to this report.