BEIJING, China (CNN) -- A married Chinese businessman who could no longer afford five mistresses held a competition to decide which one to keep. 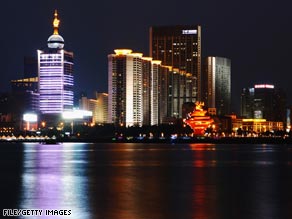 But the contest took a fatal turn when one of the women, eliminated for her looks, drove the man and the four other competitors off a cliff, Chinese media reported.

The spurned mistress died and the other passengers were injured, the reports said.

Police initially thought the car had plummeted off a mountain road in eastern China on December 6 by accident. Then they learned of the contest through a letter the dead woman had left behind, the Shanghai Daily newspaper said.

The 29-year-old woman, identified only as Yu, was a waitress when she met the businessman at a restaurant in the coastal city of Qingdao in 2000.

At the time, the businessman, identified only by his last name -- Fan -- was married and had four other mistresses, according to the Peninsula Metropolis Daily newspaper in Qingdao.

The women knew of one another, but none elected to break up with the man and give up their rent-free apartment and a 5,000 yuan ($730) monthly allowance, the reports said.

When the economy soured, the businessman apparently decided to let go of all but one mistress.

He staged a private talent show in May, without telling the women his intentions. An instructor from a local modeling agency judged the women on the way they looked, how they sang and how much alcohol they could hold, the Shanghai Daily said.

The judge knocked out Yu in the first round of the competition based on her looks. Angry, she decided to exact revenge by telling her lover and the four other women to accompany her on a sightseeing trip before she returned to her home province, the media reports said.

It was during the trip that Yu reportedly drove the car off the cliff.

The four other women left him, as did his wife when she learned of the affairs.