ISLAMABAD, Pakistan (CNN) -- Attackers in a Taliban-controlled area of Pakistan shot and tried to behead a Pakistani journalist on Wednesday, according to his employer GEO TV. 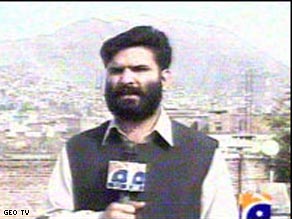 Mosa Khankhel was reporting for GEO TV when he was killed.

The slain correspondent, Mosa Khankhel, had been covering the recent peace deal between the Pakistani government and Taliban militants in Swat Valley when he was killed, GEO TV managing director Azhar Abbas said.

"He is the first martyr of this peace deal," Abbas said, adding that he believes it is unlikely the deal will end the campaign of violence that has centered in Swat.

Khankhel was traveling in a caravan with Sufi Mohammed, who was leading the peace deal negotiations for the Taliban, when he went missing, Abbas said.

His body was found about an hour later. He had been shot three times and his killers had attempted to cut off his head.

Abbas called on Pakistan's government to fully investigate the killing of Khankhel, who was the network's correspondent based in North West Frontier Province as part of GEO TV's Peshawar bureau.

His death comes a day after Pakistan's government recognized the Taliban's interpretation of sharia, or Islamic law, in the entire Malakand Division, which includes Swat and its surrounding district.

The agreement marked a major concession by Pakistan in its attempt to hold off Taliban militants who have terrorized the region with beheadings, kidnappings, death threats, and the destruction of girls' schools.

The regional government in the Swat valley struck the deal to allow sharia law, in return the Taliban agreed to a 10-day cease fire.

The Taliban control of Swat -- which is about 100 miles northwest of Islamabad -- is the deepest advance by militants into Pakistan's settled areas, which are located outside its federally administered tribal region along the border with Afghanistan.

The peace deal is the latest attempt by Pakistan's civilian government -- which took power last year -- to achieve peace through diplomacy in areas where Taliban and al Qaeda leaders are believed to have free rein.

But analysts as well as critics within the establishment have warned that Pakistan's previous dealings with the Taliban have only given the fundamentalist Islamic militia time to regroup and gain more ground.

He said the government's decision amounts to a marriage of convenience made under duress.

Swat has been overrun by forces loyal to Maulana Fazlullah's banned hardline Islamic group, Tehreek Nifaz-e-Shariat Mohammadi (TNSM) which has allied itself with Taliban fighters.

TNSM was once led by Sufi Mohammed, Fazlullah's father-in-law, who is leading the latest negotiations.

Sufi Mohammed was released from jail last year by Pakistani authorities after he agreed to cooperate with the government. He was jailed in 2002 after recruiting thousands of fighters to battle U.S. forces in Afghanistan.

Fazlullah took over TNSM during Sufi Mohammed's jail stint and vowed to continue his fight to impose fundamentalist Islamic law in the region.

Last May, Pakistan's government announced it reached a peace deal with militants in Swat Valley.

In the months that have followed, the Taliban have seized control of the region and carried out a violent campaign against government officials, including local politicians.

The head of the secular Awami National Party -- which represents the region -- was forced to flee to Islamabad amid death threats from the Taliban.

The United States -- using unmanned drones -- has carried out several airstrikes inside Pakistan on suspected militant targets, including one on Monday that killed at least 15 people, Pakistani sources said.

Such airstrikes, which sometimes result in civilian casualties, have aggravated tensions between the U.S. and Pakistan.

Pakistan's military operation in the region is unpopular among Pakistanis, but efforts to deal diplomatically with militants have not worked in the past.

Pakistan's previous leader, Gen. Pervez Musharraf, reached a cease-fire deal with militants in South Waziristan in 2006 which was widely blamed for giving al Qaeda and Taliban a stronger foothold in the region.