WASHINGTON (CNN) -- A new Defense Department report concludes that the detention center at Guantanamo Bay, Cuba, treats detainees humanely, according to a department official with knowledge of the report. 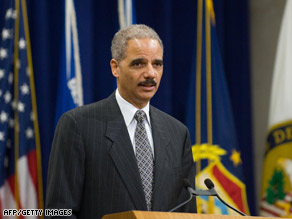 The Defense Department review also recommends that high-value and violent detainees be allowed to pray and have recreation time in groups of three, the official said.

The conclusions come in a Pentagon report prepared for President Obama, who has ordered the closing of the facility within a year.

The official declined to speak on the record because the report has not yet been delivered to the White House or publicly released.

Several detainees have claimed in court documents that they were tortured and subjected to inhumane treatment in the military prison at the U.S. naval base in Guantanamo Bay.

Most of the complaints concern the early years of the facility, after then-President Bush determined that "minimum standards for humane treatment" spelled out in the Geneva Conventions "did not apply to al Qaeda or Taliban detainees," according to a Senate Armed Services Committee report issued in December.

Separately, Attorney General Eric Holder announced Friday a formal structure for deciding what to do with detainees held at the military prison camp at Guantanamo Bay.

Holder said the Justice Department's point man on counterterrorism, Matthew Olsen, will lead a multi-agency detainee review task force, which will be responsible for making final recommendations to a senior review panel.

"The task force will consider whether it is possible to transfer or release detained individuals consistent with the national security and foreign policy interests of the United States," a Justice Department statement said.

Holder announced earlier this week he plans to take a firsthand look at the Gitmo military facility and will take Olsen with him.

All About Guantanamo Bay • Eric Holder • The Taliban