(CNN) -- U.S. Secretary of State Hillary Clinton wrapped up a 20,000-mile, four-nation trip to Asia -- her first in the new post -- emphasizing that the United States is actively engaged with the region. 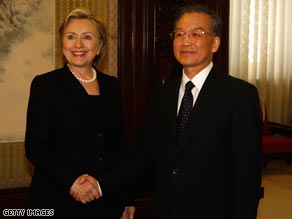 Clinton traveled to Japan, China, South Korea and Indonesia to discuss a range of issues, including solving the global economic crisis, the prevention of nuclear weapons proliferation and reversing the global warming trend. She returned to Washington on Sunday.

Clinton broached the issue of human rights with Chinese leaders on Saturday but emphasized that the global financial slump and other international crises were more pressing and immediate priorities.

The United States will continue to press China on issues such as Tibet, Taiwan and human rights, she told reporters.

"Successive administrations and Chinese governments have been poised back and forth on these issues, and we have to continue to press them. But our pressing on those issues can't interfere with the global economic crisis, the global climate change crisis, and the security crisis," she told reporters during an earlier stop in Seoul, South Korea.

"We have to have a dialogue that leads to an understanding and cooperation on each of those."

China was the last stop on her journey and the most sensitive.

Human rights, a traditional topic in discussions between the two countries, was brought up in a meeting between Clinton and Chinese Foreign Minister Yang Jiechi, who agreed to engage in a continuous discussion on the issue.

"Although differences exist, China is willing to conduct the dialogues with the U.S. to push forward the human rights situation on the premise of mutual respect and noninterference in each other's internal affairs," Yang said.

Clinton also met with Chinese President Hu Jintao on Saturday and discussed the framework for further high-level and mid-level discussions. "It is essential that the United States and China have a positive, cooperative relationship," Clinton told reporters.

Earlier Saturday, Clinton met with Chinese Premier Wen Jiabao in Beijing, and the two agreed to create a new strategic and economic dialogue which would consist of a number of issues including the environment. The United States and China are the world's largest emitters of greenhouse gases, accounting for 40 percent of world pollution.

Later that day Clinton visited a clean energy thermal power plant featuring equipment made by U.S.-based General Electric. The plant, which produces half the emission of a typical coal plant, provides heat for a million homes in Beijing as well as for the U.S. Embassy.

On the financial front, both sides recognized economies emphasized the importance of working in cooperation.

Throughout the trip, the subject of North Korea and its threatening rhetoric toward South Korea came up.

However, she stressed that if North Korea completely end its nuclear program and that work is verified, the nation could receive benefits including aid for its people from the United States and its partners.

In Jakarta, Indonesia, Clinton walked through a neighborhood in which 40 percent of the population is poor. She highlighted community projects sponsored by the U.S. Agency for International Development.

Clinton also appeared on a popular youth-oriented TV show, and in Beijing she was interviewed by a Chinese blogger and participated in an online interview on climate change.