BEIJING, China (CNN) -- A monk carrying a Tibetan national flag and shouting slogans set himself on fire in south-central China on Friday and then was shot at by police, a human rights group reported. 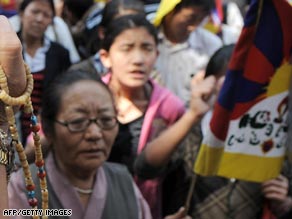 Tibetans in exile in India mark the new year and protest against Chinese rule.

Police fired three shots at the monk, but it was not known if any hit him or whether he survived, said Matt Whitticase, spokesman for the London-based Free Tibet organization. Whitticase said he based his report on eyewitness accounts.

The Chinese foreign ministry told CNN it could not offer comment on the incident because it is a "domestic issue," while the Chinese state media reported that police had put out the flames and taken the man to hospital.

About 40 minutes before the shooting, around 1,000 monks trying to observe the Monlam Festival had gathered at Kirti Monastery in Aba County, Sichuan Province, said Whitticase.

Some of the worst unrest during Tibetan protests in March 2008 occurred in the same area.

The monks had approached the gates of a prayer hall in defiance of an order by authorities that barred them from observing the Monlam Festival, which is part of the Tibetan new year.

They were prevented from entering the prayer hall and told to go back to their rooms, which they did.

A monk, identified as being in his 20s and going by the single name of Tabe, left the monastery a while later and walked the short distance into town, shouting slogans and holding a self-drawn Tibetan national flag above his head, Whitticase said. The flag contained a picture of the Dalai Lama, the spiritual leader of Tibet.

When the monk arrived in town, he doused himself with fuel and set himself on fire, Whitticase said.

The monk was immediately surrounded by armed police, who were not able to get near him because of the flames.

Eyewitnesses said the police leveled guns at the monk and fired three shots. The monk collapsed to the ground, the Free Tibet spokesman said.

After police extinguished the flames, the monk was placed in a van and driven away to an undisclosed location, the witnesses said.

Xinhua, the Chinese state news agency, reported a local official as saying that the man had been taken to a local hospital immediately after police extinguished the flames.

Shi Jun, secretary of the Aba Tibetan-Qiang Autonomous Prefecture committee of the Communist Party of China, told the agency: "The man suffered burn injuries on his neck and head." The agency added that the incident is now being investigated.

The campaigners released graphic photographs of bodies and the names of five alleged victims.

China rejects Tibetan claims of independence or greater autonomy and claims sovereignty over the area.