Nepal beefs up security ahead of Tibet anniversary

KATHMANDU, Nepal (CNN) -- Authorities in Nepal said Saturday they have beefed up security near the Chinese Embassy to stop any possible anti-Chinese demonstrations in the run-up to the 50th anniversary of the Dalai Lama's flight from Tibet. 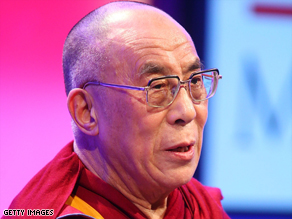 March 10 will mark the 50th anniversary of the failed Tibetan uprising that forced the Dalai Lama into exile.

"The area within 200 meters (218 yards) of the Chinese Embassy visa section has been declared a prohibited area from Friday," Nabaraj Silwal, the chief of the Kathmandu city police, said. "Rallies, sit-ins and sloganeering will not be allowed within the prohibited area."

The decision comes a day after visiting Chinese Vice Foreign Minister Hu Zhengyue had an hour-long meeting with Nepalese security officials in Kathmandu to discuss prevention of anti-Chinese activities.

The Nepal government, which recognizes Tibet as part of China, strictly controls anti-Chinese activities within the country.

On Friday, 27 Tibetan exiles were arrested around the visa office. Nine of them were still being held Saturday "because their papers are not in place," according to Silwal.

Following the Tibetan uprising in the Tibetan capital of Lhasa last March, there were almost daily protests around the Chinese embassy and the United Nations offices.

The protests stopped in September after the Communist Party of Nepal, a Maoist party, formed the government in August.

March 10 will mark the 50th anniversary of the failed Tibetan uprising against Chinese rule that forced the Dalai Lama into exile.

All About Nepal • Tibet • Dalai Lama