BEIJING, China (CNN) -- Zhao Jiuhe sweeps the floors at his dad's restaurant, chats with customers and waitresses whom he calls "older sisters," and clears the tables. 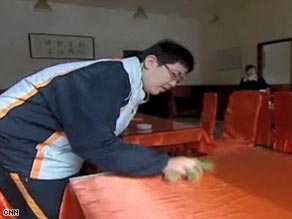 Jiuhe, who can speak some English, says he likes coming to the restaurant with his father.

But he is no ordinary 19-year-old. Jiuhe, who suffers from cerebral palsy, could not walk until he was four or talk until he was five. His father started the Beijing eatery, "Hand in Hand," to give his son a chance to improve his life after Jiuhe finished his education at a school for the disabled.

"It seems I am running a business, but I am actually taking care of him. His growth at the restaurant and the business there are mixed together. The survival of the restaurant is benefiting him, and is also a joy for our family," Zhao Dongyue said. "He is happy, we are happy."

Zhao came up with the idea to open a restaurant while the family was out to dinner about 18 months ago. Jiuhe had disappeared while they were eating, and Zhao later found him happily chatting to waitresses.

"They work so hard," Zhao recalled his son as saying. "They only make 500 yuan!"

Zhao said he spoke with other parents of mentally disabled children who were stuck at home.

"We agreed that a restaurant can be a great place for them to improve, because this is a real world, a true world. You can see all kinds of people here. It will benefit them in the future," said Zhao, who left his office job to start up and run the business.

A few other disabled young people joined Jiuhe as employees at the restaurant, which serves "Jiachang cai" or home-style Chinese food. Two of them have already moved onto other jobs.

"After working here for a while, their parents realized that they were doing fairly well. Then, they went out to hunt for jobs and started working," he said.

As of April 1, 2006, a little more than 6 percent of China's population -- or 83 million people -- were disabled, with some 5.5 million being mentally disabled, according to the China Disabled Persons Federation.

State-run options for the mentally disabled have been historically limited in China. During the era of Chairman Mao, disabled people were referred to as "can fei" -- disabled and useless.

But attitudes are changing and opportunities are getting better, especially since Beijing recently hosted the Paralympics. For example, the state now runs a project called "Sweet Home," where disabled people aged between 18 and 42 make envelopes.

Before the restaurant, Jiuhe did not have many other options than to spend days with his grandparents while his parents worked. Working has helped him improve his motor skills, such as limiting hand tremors, Zhao said.

"His skills got better very fast, and there are a lot of moments that we parents have observed. He makes advancements each day, though very small."

Jiuhe's language skills have improved the most.

"In the past, I could not even understand his pronunciation," Zhao said. "Because he has more contact with people, some of whom like him very much and would like to play with him, as well as so many 'older sisters,' waitresses and chefs, so many people talk to him every day.

" ... I see that after two days or three, he gets better -- he says a new word all of a sudden which he never learned before, and some day he just starts saying it when talking to people."

Jiuhe, who can speak some English, said he likes coming to the restaurant: "I like collecting beer bottles and arranging napkins, and I watch TV," he said.

Zhao is not sure how much longer he will run the restaurant, but he noted what it has already done for his son.

"This is a good transition, a bridge, for my kids and other kids like him. After getting skills here, they can walk into society."

All About China • Beijing