ISLAMABAD, Pakistan (CNN) -- Pakistan's president has defended his government's recent ceasefire in the country's volatile Swat Valley in a Wall Street Journal opinion piece, saying that many in the West have mischaracterized the deal. 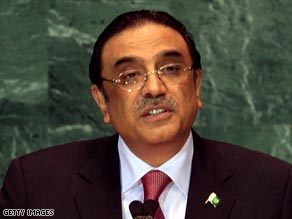 President Zardari also said that the cease-fire would not close girls' schools in the troubled region.

The permanent ceasefire, which was brokered in late February between members of the Taliban and leaders of Swat Valley, has been criticized and called a major concession by the Pakistani government in an attempt to hold off Taliban attacks.

The central government has long exerted little control in the area, but it launched an intense military offensive in late July to flush out militants from areas of the North West Frontier Province

As retaliation for the military presence, the Taliban carried out a series of deadly attacks, beheadings and destruction of girls' schools. They also continued to gain ground, setting up checkpoints throughout the area.

"We have not and will not negotiate with extremist Taliban and terrorists," Zardari wrote. "The clerics with whom we have engaged are not Taliban. Indeed, in our dialogue we'd made it clear that it is their responsibility to rein in and neutralize Taliban and other insurgents."

The deal was brokered by Sufi Mohammed, a pro-Taliban cleric who in the past was arrested for leading thousands of fighters against the United States in Afghanistan. Mohammed made the deal with his son-in-law and Taliban commander Maulana Fazlullah.

In the article, Zardari also said that the cease-fire would not close girls' schools in the region.

"We have not and will not condone the closing of girls' schools, as we saw last year when militants closed schools in pockets of Swat Valley. Indeed, the government insists that the education of young women is mandatory. This is not an example of the government condoning or capitulating to extremism -- quite the opposite," Zardari wrote.

The cease-fire deal imposes Islamic law, or sharia, in the region.

As part of the agreement, the Taliban is allowing boys' schools to reopen and the government to set up temporary quarters for the more than 200,000 Swat residents who fled.

Women in the area interviewed by CNN said that they would not be able to go to the schools and that, under Taliban-imposed sharia law, they cannot even be seen in public without their husbands or fathers.

Swat Valley, located in North West Frontier Province, was once one of Pakistan's biggest tourist destinations. It is near the Afghanistan border and is 300 kilometers (186 miles) from the capital, Islamabad.

All About Pakistan • Asif Ali Zardari • Swat Valley • The Taliban