BEIJING, China (CNN) -- Tuesday marks the 50th anniversary of the failed Tibetan uprising against Chinese rule and the chasm between Beijing and critics of its Tibet policies remains deep and wide. 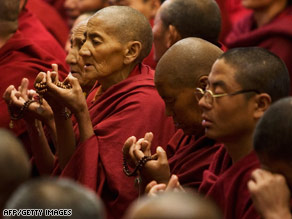 Tibetan Buddhist monks are shown praying at a ceremony to the Dalai Lama on Monday in Dharamsala, India.

Pro-Tibet supporters have marched in London and other cities to mark the anniversary. "Tibetans have had enough Chinese rule," said Matt Wiskase, a protest organizer in London. "They emphatically reject Chinese rule in Tibet and they want to be free."

The Dalai Lama said Tuesday that the Chinese government has made life "hell on Earth" for Tibetans during the half-century since a failed uprising against its rule in 1959.

But Chinese officials blame the conflict on the Buddhist leader, accusing him of seeking to sever Tibet from China.

"The Dalai side still insists on establishing a so-called Greater Tibet on a quarter of China's territory," Chinese Foreign Minister Yang Jiechi told a news conference on the sidelines of the annual session of China's parliament. "They want to drive away the Chinese armed forces on Chinese territory and ask all non-Tibetans to relocate themselves, people who have long spend their lives in that part of the Chinese territory. You call this person a religious figure?"

The Dalai Lama, 74, has repeatedly denied China's accusations. He says he seeks genuine autonomy for the region -- not independence -- and advocates the "Middle Way" of non-violence. He has won a Nobel Prize for advocating peace and is revered as an iconic figure overseas, but the Dalai Lama has never been allowed to return to Tibet, after fleeing his homeland in 1959. His emissaries have held sporadic talks with Chinese officials. But the talks, encouraged by the United States and other countries, have failed to break the impasse.

"Prior to 1959, Tibet had long been a society of feudal serfdom under theocratic rule, a society which was even darker than medieval society in Europe," according to a white paper issued by the Chinese government last week. In recent days, China's state-run television has been airing prime-time programs showing just how good Beijing believes Tibetans have it under Chinese rule.

China for decades has poured billions of dollars into Tibet to modernize one of its most isolated regions.

Since 1994, the local gross domestic product has grown at an average annual rate of 12.8 percent, spurred by rapid growth in local industry, trade and tourism, according to the paper released by Beijing last week. Such a figure is higher than the national average for the same period, and is symbolized by a high-altitude railway link from Beijing to Tibet which opened in 2007.

In recent years, the region has seen an influx of Han Chinese and other ethnic groups, enticed by business and job opportunities. Although some Tibetans have benefited from the economic expansion, others are being left behind. China's critics complain of "cultural genocide" and repression of religious freedom. Resentful Tibetans say they are often treated as second-class citizens.

Last March, resentment spilled over when a peaceful protest in the Tibetan capital Lhasa turned violent, as mobs burned vehicles and shops and attacked ethnic Chinese.

Tension was high high ahead of the 50th anniversary. Journalists are not allowed to travel into Tibet but there are reports that China has deployed extra security troops into the region to avert a repeat of last year's violent unrest. Tibet's top official, Qiangba Puncog, said the anniversary was always a sensitive period but predicted there will be no major protests. "There should be no big problems in Tibet," he told reporters in Beijing.

But Zhang Qingli, the Communist Party chief in Tibet, said they were not letting their guard down. "We must keep a watchful eye, and with clenched fists, constantly be on the alert," he told the officers of the local riot police. "We must resolutely and directly strike at criminal elements who dare to stir up incidents. We must foil the separatist schemes of the Dalai clique."