SEOUL, South Korea (CNN) -- A day after North Korea shut its borders at the start of U.S.-South Korea military exercises, hundreds of South Koreans who had been in the north were allowed to cross the border Tuesday after spending a day in limbo, an official in Seoul said. 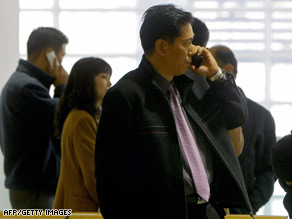 South Koreans working in Kaesong are shown on Monday waiting at a border crossing in Paju.

When North Korea took the action, 573 South Koreans were staying at the Kaesong industrial complex, north of the demilitarized zone. North Korea also planned to keep military phone lines, the last remaining communications channel, turned off to the South for the duration of the 12-day military exercises that end March 20.

On Tuesday, most of the South Koreans were given clearance to cross, though the phone lines were closed, an official with South Korea's Unification Ministry told CNN.

Many of the stranded South Koreans work at the complex, which is a joint project between North and South Korea.

The cross-border developments came as North Korea said it would retaliate if a "satellite" launch from its northeastern coast were intercepted, with the communist nation saying interference would "mean a war."

"Shooting our satellite for peaceful purposes will precisely mean a war," a spokesman for the North Korean army said in a statement Monday carried by the state-run Korean Central News Agency (KCNA).

U.S. and South Korean officials have said that North Korea appears to be preparing to test-fire its long-range missile, the Taepodong-2, under the guise of launching a satellite into space. The missile is thought to have an intended range of about 4,200 miles (6,700 kilometers), which -- if true -- could give it the capability of striking Alaska or Hawaii.

"We again urge North Korea to maintain the agreed stance of mutual respect and to stop its verbal attacks and actions that are raising tensions on the Korean peninsula," he said.

On Saturday, U.S. envoy Stephen Bosworth said he wants dialogue with North Korea, but he also spoke against North Korea's move to go forward with a launch, saying it would be "ill-advised."

CNN's Jiyeon Lee in Seoul contributed to this report.