North Korea vows to protect itself

(CNN) -- North Korea vowed Wednesday that it "will take every necessary measure to protect its sovereignty" in the midst of 12-day U.S.-South Korea joint military exercises. 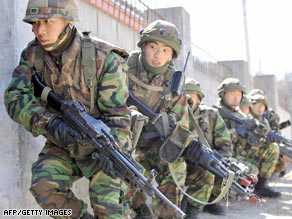 South Korean soldiers move into a building during a joint military exercise with U.S. troops in Pocheon Tuesday.

"These war exercises were kicked off by the U.S. and the South Korean puppet war-like forces across South Korea at a time when the inter-Korean relations have reached the worst phase and the situation has grown so tense that a war may break out (at) any moment due to the reckless policy of confrontation pursued by the South Korean conservative authorities," North Korea's official KCNA news agency said.

Referring to "war maneuvers" and "nuclear war exercises," a North Korean Foreign Ministry spokesman said they were "designed to mount a preemptive attack on the DPRK (Democratic People's Republic of Korea) in terms of their scale and contents from A to Z," according to KCNA.

"We again urge North Korea to maintain the agreed stance of mutual respect and to stop its verbal attacks and actions that are raising tensions on the Korean peninsula," he said.

Tensions have ramped up in recent days, as North Korea threatened retaliation in the event of an interception of its "satellite" launch.

U.S. and South Korean officials have said that North Korea appears to be preparing to test-fire its long-range missile, the Taepodong-2, under the guise of launching a satellite into space. The missile is thought to have an intended range of about 4,200 miles (6,700 kilometers), which -- if true -- could give it the capability of striking Alaska or Hawaii.

On Saturday U.S. envoy Stephen Bosworth said he wanted dialogue with North Korea, but he also spoke against North Korea's move to go forward with a launch, saying it would be "ill-advised."