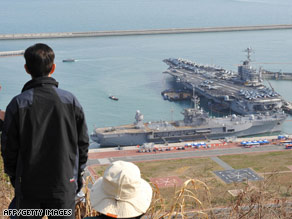 The communist nation had notified the International Maritime Organization of its plans, said South Korean Ministry of Land and Transport, which did not say when the launch was scheduled to happen.

But Yonhap, South Korea's state-sponsored news agency, said it was slated for April 4 to 8, attributing the information to an intelligence official it did not name.

U.S. and South Korean officials have long said the communist nation is actually preparing to test-fire a long-range missile under the guise of a satellite launch.

Tensions have ramped up in recent days, as North Korea has threatened retaliation if its satellite is intercepted after launch. On Wednesday it vowed to "take every necessary measure to protect its sovereignty" in the midst of 12-day U.S.-South Korea joint military exercises.

U.S. Secretary of State Hillary Clinton said Wednesday her country will still try to denuclearize North Korea through multilateral talks, even if the North launches a long-range missile.