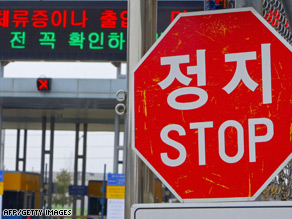 Cross-border gates between North and South Korea were closed on March 9.

The communist nation shut its border on March 9, calling 12-day U.S.-South Korean military exercises a threat to its safety. But on Tuesday, North Korea normalized visits by South Korean workers and cargo trucks to an industrial complex jointly run with the South, Yonhap said.

"The North Korean side sent us a letter of approval this morning," the news agency quoted Unification Ministry official Lee Jong-joo as saying. The letter did not explain the North's reversal, Lee told Yonhap.

Two batches of workers, totaling 287 people, crossed the border into North Korea on Tuesday, according to the Unification Ministry. More than 300 were scheduled to return at the end of the workday.

North Korea had partly opened its border Monday, allowing nearly 300 South Koreans to return home. Many of the South Koreans work at the industrial complex in the North Korean border town of Kaesong.

The border closing was part of a recent series of aggressive moves by North Korea, which included cutting the last remaining communications channel between North and South; saying that the North could not guarantee the safety of South Korean passenger jets in its airspace during the annual joint military exercises; and threatening to retaliate if a "satellite" launch from its northeastern coast was intercepted, saying interference would "mean a war."

U.S. and South Korean officials have said that North Korea appears to be preparing to test-fire its long-range missile, the Taepodong-2, under the guise of launching a satellite into space. The missile is thought to have an intended range of about 4,200 miles (6,700 kilometers) that, if true, could give it the capability of striking Alaska or Hawaii.