(CNN) -- North Korea Premier Kim Yong-Il arrived in China on Tuesday for a five-day visit that coincides with the 60th anniversary celebration of diplomatic ties between the two countries, state media said. 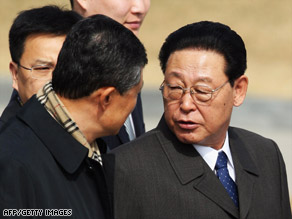 Kim Yong-Il, right, chats with his aides as he arrives at the Beijing Capital International airport on Tuesday.

He is not related to North Korean leader Kim Jong-Il, who controls the country's military.

As premier, Kim oversees economic policy and appoints ministers who are then confirmed by parliament.

North Korea is one of China's closest allies and important trading partners.

China is also hosting talks -- involving Japan, Russia, South Korea and the United States -- that are aimed at persuading North Korea to scrap its nuclear program.

North Korea has said it will soon launch a "satellite" into space that U.S. and South Korean officials say is a cover for test-firing a long-range missile.

The missile, Taepodong-2, is thought to have an intended range of about 4,200 miles (6,700 kilometers) that, if true, could give it the capability of striking Alaska or Hawaii.