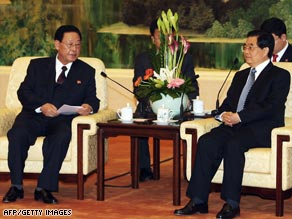 On Thursday Hu urged Kim, who is not related to North Korean leader Kim Jong Il, to find a way to continue the six-party nuclear talks, according to a statement released by the Chinese government.

Kim arrived in China on Tuesday for the five-day visit, which coincides with the 60th anniversary celebration of diplomatic ties between the two countries, state media said.

The nuclear talks stalled late last year when North Korea refused to sign an agreement on how to verify its nuclear activities, members of the Bush administration said at the time.

Talks had progressed in July 2008, ending with an agreement on a timetable for North Korea to disable its nuclear facilities. But the reclusive communist state balked at the deal, demanding the United States first take it off its list of state sponsors of terrorism.

Washington lifted that designation in October, but plans stalled on pushing for an agreement that would have allowed the other parties to check whether Pyongyang had revealed all its nuclear secrets.

The meeting coincides with the detention of two U.S. journalists, apparently by North Korean border guards, in the area of the Tumen River marking the border between North Korea and China.

Watch what's known about the detention »

Media reports have identified the women as Laura Ling and Euna Lee, from the online news outlet called Current TV, co-founded by former Vice President Al Gore. The State Department is not confirming the women's names and is not saying where the women are being held.

All About North Korea • China