WASHINGTON (CNN) -- Sailors aboard a U.S. ocean surveillance ship reacted with a mix of bemusement and profanity to what they said was harassment by Chinese ships earlier this month, according to video released Friday by the Pentagon. 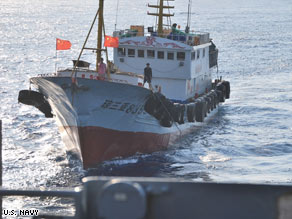 The Navy says this shows a trawler crew member using a hook to try to snag the Impeccable's towed acoustic array.

"Chinese aggression, from aboard the USNS Impeccable," one member of the American ship's crew is heard narrating. "Details at 11."

The Pentagon has raised concerns about a March 8 incident in which "increasingly aggressive" Chinese ships harassed the Impeccable, an unarmed survey ship with a mostly civilian crew.

China's government accused the ship of violating Chinese and international laws during its patrols, which took place more than 100 miles off the Chinese coast.

"The U.S. claims are gravely in contravention of the facts and confuse black and white and they are totally unacceptable to China," Ma Zhaoxu, a Chinese Foreign Ministry spokesman, said after news of the incident emerged.

Five Chinese vessels shadowed the Impeccable, with two of them closing to within 25 feet while their crews waved Chinese flags and stripped down to their underwear in a sign of disrespect. The Impeccable also turned fire hoses on one of the ships "in order to protect itself," the Pentagon said.

The Pentagon said the Chinese also attempted to snag the sonar equipment that the ship was towing behind it, leaving crew members discussing possible orders to destroy the equipment at one point.

"Lou and Wilson man the hoses while the Chinese irritate us to tears," the video's narrator reports. "Here he comes for another swipe at the array cable."

All About U.S. Navy • China • The Pentagon