KABUL, Afghanistan (CNN) -- NATO-led troops killed a senior militant and nine of his associates Saturday in an operation that targeted his house, officials said. 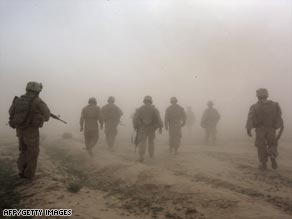 NATO-led troops in Afghanistan have killed a senior militant and nine of his associates.

Maulawi Hassan was killed by members of NATO's International Security Assistance Force in an isolated compound near Kajaki, northern Helmand. Several weapons and explosives were found at the location, according to the ISAF.

Hassan was a major player in several attacks, including suicide bombings, the ISAF said.

He answered to Mullah Rahmatullah, a senior Taliban leader who guides insurgent activities from outside Afghanistan, according to the ISAF.

"The quick reaction and professionalism of ISAF troops has also stopped the weapons and IED (improvised explosive device) components being used to cause death or serious injury."