WASHINGTON (CNN) -- North Korea has positioned what is thought to be a long-range missile on its launch pad, a U.S. counter-proliferation official said on Wednesday. 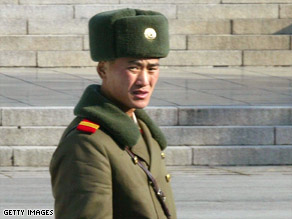 A North Korean soldier stands guard in the border village of Panmunjom on December 1, 2004 in South Korea.

North Korea recently informed a pair of U.N. agencies that it plans to launch a satellite. The launch is slated for sometime between April 4-8, according to Yonhap, South Korea's state-sponsored news agency.

Watch what might motivate Pyongyang to pursue missile tests »

Japan said this month that it could shoot down the satellite that North Korean officials said they plan to launch. What the North Koreans would be testing may not be known until an actual launch.

The United States has no plans to shoot down the North Korean rocket, U.S. Secretary of State Hillary Clinton said Wednesday, but will raise the issue with the U.N. Security Council if Pyongyang carries out a launch.

"The launching of the long-range rocket is a clear violation of the U.N. Security Council Resolution No. 1718, and we strongly urge North Korea to immediately stop such measures."

The North Korean Taepodong-2 missile is thought to have an intended range of about 4,200 miles (6,700 kilometers) that -- if true -- could strike Alaska or Hawaii.