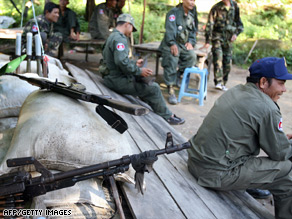 The Thai army denied the claim.

Thai soldiers crossed into the area of the 11th century Preah Vihear temple about 1:40 p.m., said Phay Siphan, secretary of the Cambodian Council of Ministers.

The two sides did not fight and Cambodia has asked Thailand to pull back.

Thai Army Col. Sansern Kaewkumnerd said the troop movement was part of a normal rotation and that Thai soldiers had not gone anywhere they were not permitted to be.

The temple sits atop a cliff on Cambodian soil but has its most accessible entrance on the Thai side.

The International Court of Justice awarded the temple to Cambodia in 1962. Thailand claims, however, that the 4.6 sq. km (1.8 square mile) area around it was never fully demarcated.

All About Thailand • Cambodia