(CNN) -- North Korea defended Thursday its right to explore outer space after reports that a rocket, believed by the United States to be a long-range missile, had been positioned on its launch pad. 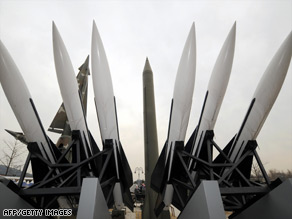 Replicas of South and North Korean missiles are displayed at the Korea War Memorial in Seoul.

North Korea recently informed a pair of U.N. agencies that it plans to launch a satellite. The launch is believed to be slated for sometime between April 4 to 8, according to Yonhap, South Korea's state-sponsored news agency.

Pyongyang lashed out against critics on Thursday in a commentary reported in the state-run KCNA news service.

"This is nothing but a groundless outcry of the political philistines ignorant of any legality of the study of space science for peaceful purposes," the commentary said.

"Outer space is not a monopoly of a few specified powers but an asset common to mankind and the space development is promoted worldwide at present." Should anyone have the right to explore space?

The United States has no plans to shoot down the North Korean rocket, U.S. Secretary of State Hillary Clinton said Wednesday in an interview with CNN's Jill Dougherty, but will raise the issue with the U.N. Security Council if Pyongyang carries out a launch.

What the North Koreans would be testing may not be known until an actual launch, U.S. officials have said.

"The South Korean government believes that if the North conducts its launch despite continuous warnings of the South Korean government and the international community, it is a provocative action that constitutes a serious threat to the security of northeast Asia and the Korean peninsula," said Foreign Ministry spokesman Moon Tae-Young. "The launching of the long-range rocket is a clear violation of the U.N. Security Council Resolution No. 1718, and we strongly urge North Korea to immediately stop such measures."

The North Korean Taepodong-2 missile is thought to have an intended range of about 6,700 kilometers (4,200 miles) that -- if true -- could strike Alaska or Hawaii.