ISLAMABAD, Pakistan (CNN) -- Two suspects were arrested in connection with the bombing of a mosque that killed at least 51 people, Pakistani authorities said Saturday. 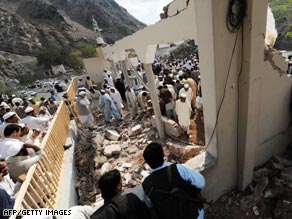 The two were arrested about 30 minutes after the Friday bombing after police spotted them fleeing the scene, said local official Rahat Gul.

The suspects were being questioned about the deadly blast that also wounded more than 100 people.

The blast occurred at Jamrod in northwest Pakistan, near the Afghanistan border.

This is the latest assault in a region populated by Islamic militants in Pakistani safe havens along the Afghan border, where NATO and the U.S.-led coalition have been battling Taliban and al Qaeda militants.

The bombed-out mosque had been frequented by Pakistani security officials who work at checkpoints along the route used by NATO to carry supplies from Pakistan into Afghanistan.

The two-story mosque had been packed with about 250 worshippers attending Friday prayers when the bomber, thought to be among the worshippers, detonated the explosive, authorities said.