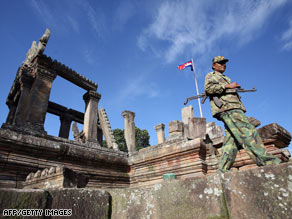 A group of about 20 Cambodian soldiers "intruded" into Thai territory and opened fire after they were warned to leave by Thai soldiers, said Thai army spokesman Col. Sansern Kaewkunerd. Both sides exchanged gunfire and rocket-propelled grenades in a firefight that lasted about five minutes with no casualties

But in a second round of fighting two Thai soldiers died and 10 others were injured, said Thai army Lt. Col. Vichit Mugkarun.

Two Cambodian soldiers and nine others were injured in the battle, the official said

Cambodian officials could not be immediately reached for comment.

The temple sits atop a cliff on Cambodian soil, but has its most accessible entrance on the Thai side.

All About Cambodia • Thailand