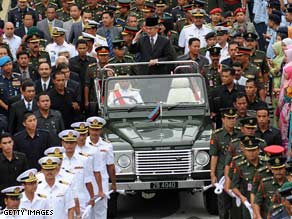 Datuk Seri Najib Tun Razak became Malaysia's sixth prime minister after taking over for from Datuk Seri Abdullah Ahmad Badawi who stepped down after leading the country for more than five years, according to the Bernama news agency.

The new prime minister will immediately be tasked with reuniting a multi-racial nation and shoring up an economy in dire straits.

He is part of Malaysia's ruling party, the National Front Coalition, which has ruled the country since it gained independence from Britain in 1957.

But last year, a loose coalition of opposition parties won 82 of 222 parliamentary seats in elections. It was only the second time in the country's history that the ruling party failed to gain the two-thirds majority needed to amend the constitution.

The election upset led to calls for Abdullah to step down.

In recent months, the country has seen riots with the country's ethnic Chinese and Indian communities who accuse the government of passing laws that favor the Malay majority. Najib has said he will do more to address their concerns.

Malaysia has been severely affected by the global economic downturn. Critics are demanding Malaysia diversify its technology-heavy economy.

Watch what can be expected from the new Malaysian leader »

Najib also brings with him a whiff of controversy. Two former bodyguards are facing charges in connection the murder of a Mongolian model. He has denied all links to the killing.