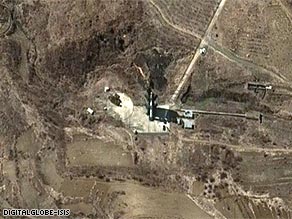 A recent satellite image shows a rocket sitting on its launch pad in northeast North Korea.

"With this provocative act, North Korea has ignored its international obligations, rejected unequivocal calls for restraint, and further isolated itself from the community of nations," U.S. President Barack Obama said in a statement.

A senior Obama administration official in Washington confirmed that the rocket did clear Japan.

Japan's chief Cabinet secretary told reporters after the launch that the country's military was not forced to intercept any missiles, which it had pledged to do if necessary.

Preliminary data show that two objects, likely boosters from the rocket, apparently fell around Japan, one in the Sea of Japan and one in the Pacific Ocean.

An October 2006 resolution condemned North Korea for missile launches in the summer and a nuclear test that same month.

Watch the debate about what North Korea is allowed to do »

The office of the South Korean president condemned the launch, calling it a "serious threat" to world peace, the state-run Yonhap news agency reported.

"We cannot withhold our regrets and disappointment that North Korea has caused such a serious threat to peace on the Korean Peninsula and in the world by firing a long-range rocket when the entire world is joining efforts to overcome the global economic crisis," Lee Dong-kwan, a presidential spokesman said, according to Yonhap.

On Friday, Obama reiterated that the United States strongly opposes any such launch.

"We have made it very clear to the North Koreans that their missile launch is provocative, it puts enormous strains on the six-party talks and that they should stop the launch," Obama said while on a stop in France.

Obama warned that the United States will join with its allies to take "appropriate steps" to let North Korea know it can't violate United Nations rules and get away with it.

Also, Japan's representative to the United Nations, Yukio Takasu, sent a letter requesting an urgent Security Council meeting in response to the launch. The letter to Claude Heller, Mexico's representative and the current security council president, was sent minutes after news of the launch broke.

"Whether it is a satellite launch or a missile launch, in our judgment makes no difference. It is a provocative act," Bosworth said.

Bosworth said the U.S. stands ready -- after a launch -- to participate in United Nations deliberations on new sanctions against North Korea.

"It is alarming that North Korea carried out this missile launch in direct defiance of the international community," Berman said. "The test is an unnecessary provocation that raises tensions in the region, and I urge the North Koreans to stop using their missile and WMD programs to threaten their neighbors and the rest of the world."

CNN's Jie-Ae Sohn in Seoul, and Charlie Keyes and Elise Labott in Washington contributed to this report.

All About U.S. Navy • North Korea