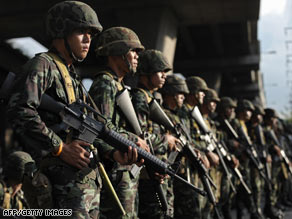 Protesters took over two gas tanker trucks in one Bangkok intersection, ramping up the intensity of the ongoing conflict.

"We're at a freeway intersection and they've commandeered two gas tankers that they are threatening to blow up," CNN Correspondent Dan Rivers reported from the scene.

Protesters elsewhere lit fires in the streets, blocked intersections and surrounded the prime minister's office, where there was no sign of security. Rivers said protesters had slashed the tires of a police van.

Video from the scene showed shield-wielding riot police clashing with protesters, and at times people were carried away on stretchers. There were no immediate figures on deaths or injuries.

"What they're trying to do is face down the government, which so far has appeared -- it must be said -- very weak and unwilling to order the police or the army to use much force," Rivers said. "That was, until a few hours ago where .. they have started to crack down on this movement."

Earlier, Thai Prime Minister Abhisit Vejjajiva announced a state of emergency Sunday in the capital and surrounding areas in an attempt to tamp down days of heightening protests.

Thousands of "red shirt" protesters have rallied for days to demand Abhisit's resignation. The red shirts have given the prime minister repeated deadlines to resign, but those have come and gone.

The protesters are loyal to former Prime Minister Thaksin Shinawatra, who was ousted in a 2006 coup. They have said Abhisit's government was not democratically elected and want him to resign and schedule elections. iReport.com: "Red shirts" take to streets

Abhisit, who has held the position for four months, has rejected calls to step down.

Meanwhile, Thaksin, in a video-link speech from an unknown location, urged his supporters to revolt, according to a report MCOT, a public company run under the supervision of the Thai prime minister's office.

Thaksin said he would return to Thailand to lead people in a march on the capital if necessary, according to the report.

Immediately after Abhisit's state-of-emergency declaration, dozens of protesters stormed the country's Interior Ministry and pelted Abhisit's car with rocks, chairs, flags and sticks as he escaped.

Protesters climbed atop two military armored cars after laying down on the road and blocking its path. A police officer was led away by demonstrators and beaten, said Sathit Wongnongtoey, an official in the prime minister's office.

The emergency measure will allow officials to arrest and detain protesters without a court order, and to restrict gatherings, authorities said. iReport.com: "Numerous buses set ablaze"

Also Sunday, police arrested a leader of the red shirt movement -- named for the color of their demonstrators' attire. The leader, Arismun Pongruengrong, was charged with inciting people to break the law, police said.

Arismun led demonstrators who forced their way into a hotel Saturday where Asian leaders were to meet. The action prompted the indefinite postponement of the Association of South East Asian Nations (ASEAN) summit in the southern coastal city of Pattaya.