(CNN) -- Conservationists have found a new population of orangutans in a steep, mountainous corner of Indonesia -- a discovery that significantly adds to the number of the endangered red-haired primates. 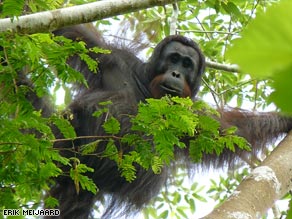 The orangutans were discovered in a mountainous corner of Indonesia.

About 65,000 orangutans are thought to remain in the wild, limited to rain forests on two islands in Malaysia and Indonesia: Borneo and Sumatra.

The latest population was found in the eastern edge of Borneo, with conservationists counting 219 nests. Even by conservative estimates, that raises the total number of the orangutan population by at least a couple of hundred, maybe thousands.

"We rarely have something positive to report in the conservation world. Most of the stories are about declining population or animals dying. It's all pretty negative," said Erik Meijaard, a senior ecologist with the U.S.-based Nature Conservancy.

"So to find a substantial population of potentially several hundred to several thousand animals is very exciting."

Locals in the area had long spoken of an orangutan population in the hard-to-access limestone mountains of the Kalimantan province. A group of conservationists reached the area in December after driving for a day, taking a boat for another, and then hiking across steep mountainous terrain for two, Meijaard said.

The remoteness of the area has meant that the animals have been undisturbed by development. Elsewhere, the orangutan's forest habitat has been cut down for timber extraction and palm oil, used in food and cosmetics.

Orangutans, a species of great apes, with hair that is usually reddish-brown instead of the black or brown. The name is derived from the Malay and Indonesian words for "orang" (person) and "hutan" (forest). They spend most of their time on trees, subsisting on fruit and leading a solitary existence except to mate.

The expedition in December found the nests crammed into just a few miles in the 2 million-acre forest.

"The immediate steps include going back to the area to see how far the population ranges and to put better protection in place," Meijaard said.