(CNN) -- The declaration of a state of emergency in Thailand following violent clashes between anti-government and security forces marks the latest escalation in a long-running political crisis which has plunged the southeast Asian country into frequent bouts of disorder and instability. 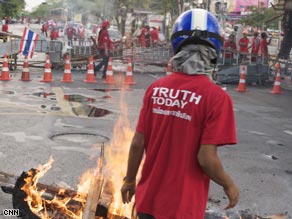 The scene from the streets of Bangkok on Monday showed widespread protests against the government.

This weekend's protests, which included forcing the postponement of a summit of Asian leaders in the southern coastal city of Pattaya and demonstrations on the streets of Bangkok, were orchestrated by red-shirted supporters of the controversial and corruption-tainted former prime minister Thaksin Shinawatra.

Thaksin -- a multibillionaire media tycoon elected in 2001 on a populist platform that promised universal healthcare and cash handouts to poor villagers -- was ousted from power in a bloodless army coup in 2006 and has been in exile abroad since being sentenced last October to two years in prison after being convicted of a corruption charge by Thailand's Supreme Court.

But Thaksin remains a polarizing figure in Thailand, commanding substantial support in the countryside.

Until last year, Thaksin's allies had remained in power with the government headed by the exiled prime minister's brother-in law, Somchai Wongsawat, despite disruptive protests by the opposition People's Alliance for Democracy (PAD), whose supporters dressed in yellow and represented Thailand's traditional ruling class, suspicious of Thaksin's populist model of democracy.

But the PAD achieved its goal of ousting Somchai in December after a week-long occupation of the prime ministerial Government House offices and blockading Bangkok's main airports, stranding thousands of tourists.

But Thaksin's supporters insist that Abhisit was not democratically elected and have vowed to protest until fresh elections are held.

On Sunday, Thaksin told protesters via a video link from an unknown location that he would return home to lead them in a march on the capital if necessary.

"Now that they have tanks on the street and the soldiers are coming out, so it is time for the people to come out for a revolution," Thaksin said.

Firstly, Abhisit could call a snap election, which he would be unlikely to win because Thaksin's allies continue to lead polls.

Secondly, he could resign, resulting in the creation of another coalition which would struggle to unify the rival factions, leaving open the likelihood of further protests from one side or the other.

Thirdly, Thaksin could return from exile to lead a red-shirted uprising; a scenario which Rivers describes as "messy and bloody." iReport.com: "Numerous buses set ablaze"

Fourthly, the army could again intervene, as it has done in the past, although Rivers says that would do little to heal the deep divisions between both sides.

Finally, Rivers said, Abhisit could choose to ride out the protests or "get tough." But both strategies would likely damage his standing.

"Trying to ignore the protests will leave him looking even weaker; ordering a violent crack-down may simply harden the resolve of the red shirts and provide fodder to their questionable claims that Abhisit has dictatorial tendencies," Rivers said.