(CNN) -- The White House on Tuesday upbraided North Korea, calling on the communist nation "to cease its provocative threats, to respect the will of the international community and to honor its international commitments and obligations." 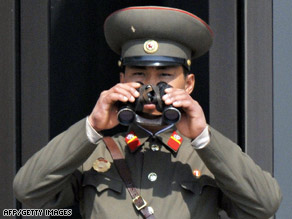 A North Korean soldier looks into South Korea from the demilitarized zone on April 9.

North Korea, angered by the U.N. Security Council's unanimous condemnation of the rocket launch, has threatened to walk away from the six-party talks aimed at disarming the country of nuclear weapons. It has said it will restore its disabled nuclear reactor.

North Korea also told International Atomic Energy Agency inspectors in the Yongbyon reactor facility that it "is immediately ceasing all cooperation" with the atomic energy watchdog, the agency said on its Web site. "It has requested the removal of all containment and surveillance equipment, following which (agency) inspectors will no longer be provided access to the facility."

The agency's inspectors "have also been asked to leave" North Korea "at the earliest possible time," it said.

North Korea also told the agency that "it has decided to reactivate all facilities and go ahead with the reprocessing of spent fuel," it said.

"North Korea will not find acceptance by the international community unless it verifiably abandons its pursuit of nuclear weapons," he said. "The six-party talks offer North Korea the best path towards that acceptance through dialogue.

"The United States is prepared to work with North Korea and its neighbors through the six-party process to reduce tensions and achieve the elimination of nuclear weapons from the Korean peninsula."

Secretary of State Hillary Clinton called North Korea's decision to stop cooperating with the atomic energy panel "an unnecessary response to the legitimate statement put out of concern by the Security Council."

"Obviously we hope there will be an opportunity to discuss this, not only with our partners and allies, but also, eventually, with the North Koreans," she said.

In a statement carried by the state-run Korean Central News Agency, the North Korea Foreign Ministry called the U.N. condemnation of the nation's April 5 missile launch a gross infringement on North Korea's sovereignty.

"Now that the six-party talks have turned into a platform for infringing upon the sovereignty of the (Democratic People's Republic of Korea) and seeking to force (it) to disarm itself and bring down the system in it," North Korea "will never participate in the talks any longer nor it will be bound to any agreement of the six-party talks," the statement said.

"It will take the measure for restoring to their original state the nuclear facilities which had been disabled under the agreement of the six-party talks and putting their operation on a normal track and fully reprocess the spent fuel rods churned out from the pilot atomic power plant as part of it," the statement said.

In addition to North Korea and the United States, the six-party talks involve China, Japan, Russia and South Korea.

China's Foreign Ministry issued a statement Tuesday urging all parties involved in the talks to "exert calmness and restraint, jointly maintain peace and stability of the Korean Peninsula and Northeast Asia, and make concerted efforts to consistently facilitate the six-party talks and denuclearization on the Korean Peninsula. This serves the common interests of the international community and countries in the region."

The Security Council's declaration followed days of considering how to respond to North Korea's April 5 launch of what it said was a communications satellite. The United States has said that the satellite did not reach orbit.

The U.S. ambassador to the United Nations, Susan Rice, said the United States is pleased with the language in the statement, which was reached through compromise after the five permanent members of the Security Council and Japan could not come to agreement on a resolution outlining new sanctions.

The statement says the rocket launch was "in contravention" to a 2006 Security Council resolution that demanded that North Korea not launch any ballistic missiles. It also calls for North Korea and other nations to "comply fully" with their obligations under that resolution, including certain sanctions.

The resolution allows for an "adjustment" of sanctions, and Monday's statement sets up a committee to make recommendations on such an adjustment by April 24.

China's ambassador, Zhang Yesui, has said his country is pleased that the Security Council adopted a presidential statement instead of a new resolution.

Both Zhang and Russian Ambassador Vitaly Churkin argued for a "reasoned" approach to North Korea.