NEW DELHI, India (CNN) -- The bodies of the nine suspected Pakistani terrorists -- all believed to have been involved in the attacks on Mumbai -- are still lying in a hospital morgue almost five months after the attacks occurred. 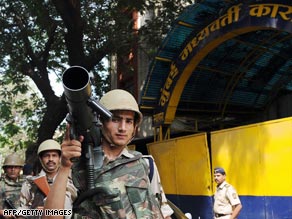 Security is tight for the trial of the only surviving alleged Mumbai terrorist.

The public prosecutor trying the lone surviving suspected gunman in the Mumbai attacks told CNN the dead suspects have not been buried because no one has come to claim them and local Muslim officials are refusing to bury the men in Mumbai's Muslim graveyards.

Public prosecutor Ujwal Nikam said he will soon be in discussions with officials to decide what should happen with the bodies.

The burial issue has stoked controversy. Groups such as the Indian Muslim Council don't want the people buried in Muslim cemeteries because they have defamed the religion. Other Muslims have disagreed, saying burial should be available for any Muslim.

John O. Voll -- professor of Islamic history and associate director of the Prince Alwaleed bin Talal Center for Muslim-Christian Understanding at Georgetown University in Washington -- said the Abrahamic religious traditions, including Judaism, Christianity and Islam, have very often set restrictions on grounds they have sanctified for burials. One stricture, for example, has been prohibiting burial of a person from another faith.

"The non-burial" of the suspected terrorists "is making the statement that they are acting so contrary to Islam they are not acting as Muslims and therefore they are judged as being unbelievers and not worthy of being buried in a Muslim cemetery," Voll said.

India, which has a population of over 1.1 billion people, is 81 percent Hindu, 13 percent Muslim, and 2 percent Christian, according to data from the World Almanac.

One surprising aspect about the burial issue, Voll said, is that the Indian Muslim community is usually not very proactive publicly and tries to avoid publicity.

"In this particular case, it's very important for the Indian Muslim community to make it clear that they have nothing to do with the people who claim to be Muslims who engaged in terrorism in Mumbai," Voll said.

Police say the 10 men gunned down more than 160 people in the November attack on Mumbai, India's financial capital.

The attack went on for four nights and three days including the siege of three luxury hotels and a Jewish center.

Police say Kasab is the only suspected gunman caught alive. The alleged actions of the nine suspects who were killed in the attacks will likely play a role as the prosecution builds its case against Kasab.

After months of delays due to security concerns and difficulty finding an attorney to defend Kasab, his trial finally got under way Friday. Kasab is being charged with 12 criminal counts including murder, attempted murder and waging war against India.

Police say he was caught on a surveillance camera holding a gun as he stalked and killed people inside Mumbai's main train station, formerly known as Victoria Terminus. Kasab is also accused of shooting people at Mumbai's Cama hospital.

Kasab's newly court-appointed defense attorney, Abbas Kazmi, argued that Kasab was under age and should be tried in Juvenile Court, but Judge M.L. Tahilyani disagreed saying Kasab was more than 20 years old and could not be considered a juvenile.

In his opening statements Nikam read from Kasab's alleged confession on how he trained for the attacks. The terror attack was in order to capture Kashmir, Nikam said.

The Kashmir territory has long been a source of tension between India and Pakistan.

Kazmi said Kasab is now retracting his statements because Kasab says he confessed under police pressure. The court hearing is continuing.

From CNN's New Delhi bureau and Joe Sterling in Atlanta