(CNN) -- From the world's biggest manufacturer of mobile phone batteries to a car company with global pretensions, BYD is a Chinese company that has roared onto the international stage energized by its workaholic founder Wang Chuanfu. 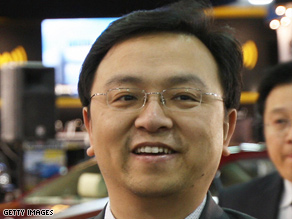 Building his own dreams: Wang Chuanfu has turned BYD into an international company in less than 15 years.

Wang's hands-on approach to running a business with 130,000 employees -- he still eats in the company canteen and lives in a BYD-owned housing complex -- isn't too far removed from how he built the company from scratch in 1995 when he was 29 years old.

Wang trained as an engineer and studied the patents of other companies' mobile phone batteries, even taking them apart to see how they were made. He raised some start-up capital from a relative to create his own mobile phone battery-making business in Shenzhen, the special economic zone just north of Hong Kong.

BYD's business approach differed from the likes of Sony and Sanyo by substituting an automated system for one of China's biggest resources, physical labor.

Employing thousands of people was cheaper than installing expensive robotic assembly lines, and by 2000 BYD had become the biggest mobile phone battery maker in the world.

Wang bought a failing Chinese car company in 2003 to enter the automobile market, and BYD now has a number of models available in China, including a plug-hybrid car cheaper than the market-leading Toyota Prius.

The success of BYD has attracted plenty of attention from industry analysts and investors from the West, including Warren Buffet. The billionaire American has invested $250 million in BYD, making even more people in the West sit up and take note of the company.

Wang isn't content to just compete in the hybrid and electric car market in China; he aims to keep BYD's meteoric rise going and make it the world's biggest car maker by 2025.

"It is a big ambition. In January and February 2009 China was the world's biggest automobile consuming market for those months. So based on this, China can sell more than 10 million automobiles this year. So maybe China can exceed the USA and become the biggest market in the world," Wang told CNN.

BYD stands for "Build Your Dreams" and Wang is trying to fulfill the aspiration among many in China of creating a national champion; a brand with international respect and reputation of quality.

Wang believes the electric car can be that product, and BYD the company to do it.

But the term "Made in China" still has a stigma attached to it. The scandals of tainted milk and toys that had to be recalled rocked China in 2008 and diminished the reputation of Chinese products abroad.

"This kind of 'Made in China' is different from other types of 'Made in China.' Our products have never been recalled, unlike many of our competitors. Judging from that, products made in China are sometimes better that those made elsewhere. As long as there are high-standards, Chinese manufacturing companies can definitely meet those standards," said Wang.

China also has acute environmental problems. It is the world's biggest emitter of greenhouse gases and Wang is aware that being an entrepreneur also means having an eye on the environmental impact of his business.

"As an entrepreneur, I think I have to consider both aspects. One part is the creation of a new business mode, or the revelation of new business competition. The other is that it's for social responsibility, making our Earth bluer.

"Urban pollution, reliance on petroleum and emission of carbon dioxide are three problems that entrepreneurs have to consider for basic social responsibility," said Wang.