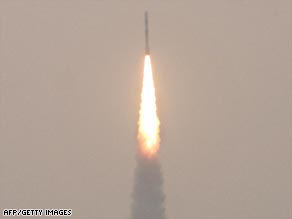 The RISAT-2 takes off from Sriharikota, along India's eastern coast.

The Indian Space Research Organization, which last year launched an unmanned mission to the moon, said RISAT-2 would boost its Earth observation, especially during natural disasters such as floods, cyclones and landslides.

In a statement after the launch at 6:45 a.m. local time, the space agency made no mention of defense surveillance as a possible use for the satellite, which weighs 300 kg (661 lbs) and is in orbit 550 km (341 miles) from Earth.

RISAT-2 took off from Sriharikota, along India's eastern coast.

The space agency described ANUSAT as an experimental communications satellite built under its guidance by an Indian university.

ANUSAT can store and transfer educational data, such as exam papers, from one institution to another, said space agency spokesman S. Satish.